Dealing With Dogs While Running 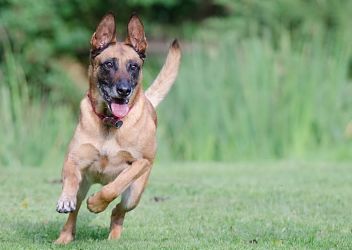 Dealing with dogs while running is something that bothers a lot of runners, me included.

Whether you run in the city, the countryside, in forests or on mountain trails, at some point (if you haven't already), your'e going to meet a dog who is less than friendly.

Not all dogs are going to be bothered by you but it is always wise to be prepared for the dog with the snarly growl and attacking stance which to be honest, is pretty scary.

Be prepared - Dealing with dogs while running

It is a nuisance sometimes to have to carry extra stuff whilst out running, but sometimes it is necessary.

If I know that I am going to be running where there might be dogs such as in the vineyards, then I'll take a small but solid stick along with me plus pepper gel spray.

I know of others who carry handheld pepper spray especially for runners and someone even suggested that I carry insect spray.  Be careful with carrying  pepper spray as although it is legal in all US states there may be  restrictions where you live.

In the UK carrying pepper spray is illegal. An alternative is to carry a mini spray bottle with either plain water in it or a mix of water and lemon juice. Although not as effective as pepper spray, a couple of squirts might be enough to deter or confuse the dog whilst you make an escape.

What do you do if you encounter dog(s)?

Dogs by nature are protective to their owner and to their 'patch'. It is not just big dogs or pitbulls that you need to be wary of as any dog can be dangerous if it feels threatened.

Unlike with humans, if the dog is not happy to see you, you are not going to be able to explain to it that you are just out for a run, minding your own business and could it please move out of the way.

Your main aim when dealing with dogs while running is to show the dog that you are not a threat. Don't play a game of seeing who is braver than who as generally the dog will win.

STOP running. If you run then the dog see this as a challenge or a game and will then chase you.

Quickly asses the dog's body language. If it is growling and bearing its teeth, it is not happy to see you. If its head is above or lower than its body, then the dog is more likely relaxed. However if his head is in line with his body, he may be getting ready to attack.

DON'T look the dog in the eyes.  That will be seen as a challenge by the dog. And don't smile as the dog might interpret that as you bearing your teeth.

TURN your body away from the dog. This makes you seem smaller to the dog and so less of a threat.

KEEP your arms by your side. Raising them is seen as confrontational.  Also don't create a fist with your hands as that is also seen as threatening.

SLOWLY start moving. Very slowly back away from the dog, avoiding eye contact.  Keep moving until you are out of its sight and only then can you resume running.

Try not to scream. A scream will scare the dog and put it on attack alert.

How to best protect yourself if a dog attacks you

Helping someone who is being attacked by a dog

lf you see someone being attacked by a dog, it is pretty scary to try and intervene.

However if you can, try and kick the dog in the ribs which are pretty fragile.


Grab a stick and whack the dog on the back of its head or on its snout.

Throw a jacket or other clothing onto the dogs head. This can sometimes subdue it. Then try and grab its back legs in order to destabilize it.

If there are stray dogs around who are being aggressive, then the police need to know. If they didn't attack you, they may well attack someone else.

If you know where the dog lives, talk to the owner. The owner needs to take responsibility and measures to stop it happening again. If you are not happy with the owners response then report them to the police.

If you were bitten, depending on the severity you may need to go the your doctor or the hospital for treatment.

If the bite is more of a surface wound, then go straight home and wash it thoroughly with running water. Apply an antibacterial spray, cover the wound and keep a close eye on it. If over the next 24 hours it starts to get very red, sore or inflamed, then go and see your doctor.

If the dog bite broke through your skin and into the tissue or muscle then definitely go the hospital or your doctor. You might need stitches, anti tetanus or anti rabies injections and antibiotics.

As a closing thought....... not all dogs are out to aggress or to attack you. However if you don't know the dog, always be cautious and remember for many dogs a moving target like a runner incites their natural instinct to chase.